The nicest times to be outside are mornings and evenings during the summer in Texas. This is when you walk your dog, work in your flower beds, and play outside with the baby. During the rest of the day, most Texans look for air-conditioning, a thick shade, or a swimming pool. Unfortunately, morning and evening is the time when the unpleasant whining of mosquitoes is heard, with the accompanying rhythm of hand slaps, and epitaphs. Many people dislike using much mosquito repellent on their children and are forced to keep them inside when the kids naturally want to go out to play. One of the nicest things about living in the country is that we get to control our mosquito population much better than those who live in town. Surprised? You should be, and you need to be informed about the Asian Tiger Mosquito which infests all of Texas' towns. The Asian Tiger Mosquito, Aedes albopictus, was introduced from Japan in used automobile tires imported to Houston in 1985. The tires were made with a high grade of rubber in them and were imported for recapping.

Asian Tiger Mosquitoes are easily identified. They are rather small, and have black and white striped legs (like Dr. Seuss' Cat in the Hat) with white marks on their heads and a conspicuous white stripe down the back (the thorax). 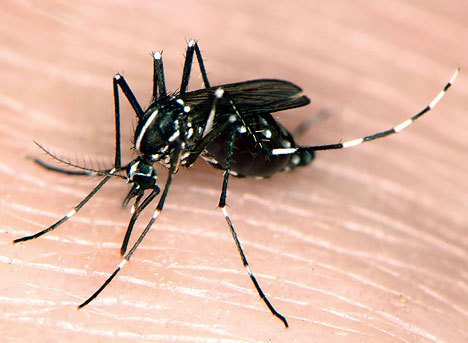 The Asian Tiger Mosquito is a tree-hole floodwater mosquito that made their home in the forests of Asia. They only need a small container with a few inches of water in it to lay their eggs around the container's sides. The eggs are encapsulated and thus protected when the water dries up. The eggs can survive long periods of drought this way. When it rains and refills the container, the mosquitoes quickly hatch and can emerge as adults in one to several weeks, (depending upon if the water is above 60 F or not), before the water dries up again. Thousands of mosquitoes can hatch out in a teacup during one summer. The voracious species made it all the way to Chicago up the interstate corridor in just a few years. Now the whole eastern half of the US is infested with Asian Tiger Mosquitoes because they are very cold hardy, and can continue to lay eggs in any container that remains just above freezing. This means that they can hatch out nearly all year around in Texas! Old black tires are perfect hotbeds for the Asian Tiger Mosquito. Tires retain a little water nearly all the time, and the black rubber remains warm in the sun in the winter so that it almost never freezes. They also hatch out just fine in children's toys, pet watering pans, and flower saucers, as well as in a forgotten birdbath, or an old abandoned fishpond. They prefer containers in the shade with organ matter in the water, to clean water vessels in the sun. Rain barrels are another favorite hatching container.They will not lay eggs in marshes, ponds, or moving water. Female Tiger Mosquitoes lay 40-150 eggs after one blood feeding which occurs about once a week.

Unfortunately, Asian Tiger Mosquitoes are also famous for their disease carrying capabilities. In the US, they have been identified as hosts for West Nile Virus, LaCrosse encephalitis viruses, dog heartworm, and Eastern Equine Encephalitis. Dengue Fever is gaining a foothold in Texas. In 2005, 16 people where diagnosed with Dengue Fever in Brownsville, Texas. In Asia, they are one of the main vectors of Dengue Fever, malaria, and have proven in the lab also be efficient at carrying Yellow Fever. Research to control the Asian Tiger Mosquito has been going on since it was discovered to be spreading in the US. So far, nothing much has been successful, not even mass spraying of insecticides, because that does not touch the little hidden pots of water where their millions hatch out.

The best way to control the mosquito is by eradicating it's breeding containers. This sounds impossible, but during the time of digging the Panama Canal, Yellow Fever was so widespread that it delayed the digging of the canal. Then it was discovered that the Yellow Fever Mosquito was the culprit and it was a tree-hole floodwater mosquito also. A massive campaign was enacted to control the mosquito by informing the people of how it bred. The army even went from door to door inspecting backyards to look for small containers of water that could hatch out mosquitoes. The campaign was a huge success, the Panama Canal was finished, and the local people enjoyed life without out Yellow Fever.

You could do a little campaign in your own neighborhood. The Asian Tiger Mosquito stays within a half mile of it's breeding site, so it's possible that you could keep your own neighborhood fairly free of the pest. To do this first Inform all your neighbors of how the mosquito breeds. Then do a neighborhood clean-up to especially help those who cannot help themselves such as the elderly, and to clean up abandoned lots. Look for any type of old containers such as pet dishes, plastic containers, trash on abandoned lots, and children's outdoor toys such as unused wading pools. Remember that the best breeding grounds for the Asian Tiger Mosquito are old tires. Immediately get rid of those, or drill lots of holes into them so that they cannot hold any water. Empty all pet watering containers, wading pools, and such once a week at the minimum. If you have a fishpond, keep a fish in it to eat the larvae. If you like to keep a rain barrel to water your plants pour a capful of Sevin in it. It won't hurt mammals, but it will kill mosquitoes and larvae. You can also buy a doughnut mosquito insecticide that you float in your rain barrel that's supposed to be harmless to mammals.

If you do these simple things, people visiting you will soon be commenting upon how you don't have very many mosquitoes, and you can tell them how you did it. We don't have to put up with being infested with the Asian Tiger Mosquito. Texans can again enjoy the cool morning and evening hours outdoors without smothering themselves in insecticide, or just hibernating indoors all summer. Oh the beauty and fragrance of the garden where the clear cool air is full of bird songs, not the whine of mosquitoes! People can again enjoy sitting on their decks and porches to greet old friends in the cool of a beautiful Texas evening. Can you imagine life without many mosquitoes? I have this wonderful luxury at Hummingbird Hill, and so can you.