Canna lilies grow well in Central Texas. Perhaps they grow too easily for we tend to take them for granted around Texas. They are very popular all over the world with hybridizing work going on worldwide, and especially in England, Australia, United States, and Israel. Cannas now come in every color variation of flowers including white, but not in blue and purple. There are four height groups: pixie, (sixteen in to two ft.), dwarf (24 in to three ft), medium (three to five ft), and tall (taller than five ft). There are also some with striped colorful leaves like the 'Pretoria' variety, white variegated leaves like on 'Stuttgart' , and some with dark, nearly chocolate colored leaves, and variations in-between. Many of the highly sought plants are those with drooping orchid-like flowers, instead of the big flowers you might be used to seeing. Varieties with self-cleaning flowerscapes are also for sale. These are really nice, as the beauty of the large tropical flowers is spoiled when they are full of messy, brown flower petals. Those of us with ratty, overgrown beds of canna eaten up by grasshoppers will be surprised that it is the large exotic leaves that excite canna lovers more than the flowers for their use in landscaping. 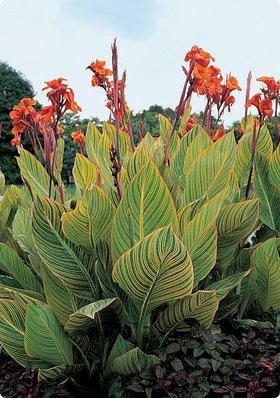 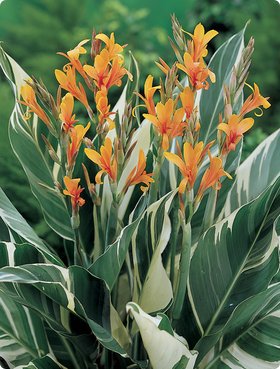 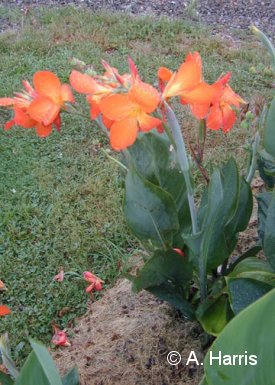 C. generalis 'Orangepunch' has a spray of flowers similar to an orchid.
Photo from grower 'Van Bourgondien' 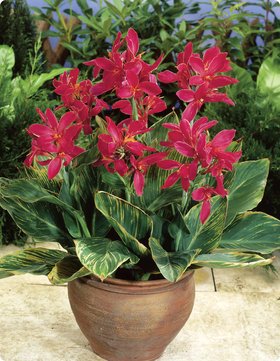 Dwarf canna 'Pink Beauty'
Cannas were collected in the West and traded around the world ever since the first European explorers came here. They became naturalized in Asia, and Linneaus named our Indian Shot Canna C. indica because he thought it was native to India. The first recorded hybridizing of our large flowered, modern varieties of canna came by the crossing of C. indica with C. flaccida by a Frenchman, Monsieur T. Annee, in the mid-eighteen hundreds. Soon many varieties of cannas were available everywhere because of the ease of hybridizing and growing them from seed. They were wildly popular in the Victorian era, and many old gardens are still populated by these old varieties. You might have some of these old varieties in your garden, for cannas are easily shared. Some common species canna I have seen in gardens around here are C. indica ( Indian Shot Canna) which is over five ft tall with very showy flowerscapes of multiple small brilliant red flowers, and C. flaccidus (Yellow Ditch Canna). These common species canna are hard to find listed for sale in nurseries, and some have high price tags, where in the southern US they are considered wild flowers!

Cannas do best in full sun, but some will grow OK in partial shade. Some species cannas will grow well on the edges of water gardens, and most will do fine in boggy soil, but they also do great in ordinary well-drained rich soil that is not too alkaline. Canna lilies do best where they can get adequate water, but they are really quite drought tolerant. Just look at them growing for years in neglected lots all around Central Texas without an ounce of care. Canna lilies respond to fertilizer and mulch. Put the mulch and fertilizer on in the fall or spring when the herbaceous growth is dormant. Canna lilies do not have to be lifted to protect them from freezing in Central Texas, but they do have to be protected in zones above eight. In warm climates like Texas, cannas multiply very fast and will need to be divided every few years.

Canna lilies used to have few disease problems. The worst was perhaps the Canna leaf rollers (caused by the Brazilian skipper caterpillar), or Canna Rust. Sometimes in wet weather the blooms are infected with Botrytis Blight, a type of gray fuzzy mold, or Rhizome rot. Fungal leaf spot (Alternaria spp), or nematodes might be a problem. The cure for the leaf roller is to cut off the affected leaves, or use an insecticide like Sevin mixed with some dish soap to make it stick to the waxy leaves. Botrytis Blight is controlled by removing the diseased flowers. Rhizome root rot is controlled by thinning the plants periodically, and throwing away any diseased roots.

Many new exciting varieties have been developed in recent years and due to the ease of shopping on the internet, nurseries vied with one another to come up with the newest and best. People were buying and shipping cannas everywhere. Then suddenly in the year 2004 the canna bubble burst and a new virus blasted canna growers worldwide. It was first identified in a Minn, USA nursery, sixteen years before, but by 2004 it had already spread worldwide. Whole canna collections that represented a hundred years of hybridizing were destroyed, never to be seen again, because there is no cure for plants with a virus.

This new destructive virus is the Canna Yellow Mottled Virus or CaYMV. It is only spread vegetatively through division of diseased plants and spread to other plants using contaminated tools. The surprise is that it has spread so quickly to nurseries worldwide. Then, because of the destruction, people began to pay attention to canna viruses to identify what was going on, and it was discovered that cannas could actually be infected with four other viruses! These are the Canna Yellow Streak Virus, CaYSV, the Bean Yellow Mosaic Virus, BYMV, and the Cucumber Mosaic Virus, CMV. Some new varieties with streaked leaves were actually found to be infected with one or more of these viruses causing the streaks, and could infect other cannas! 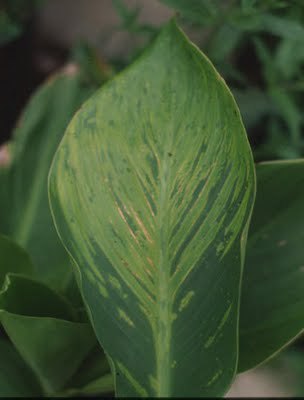 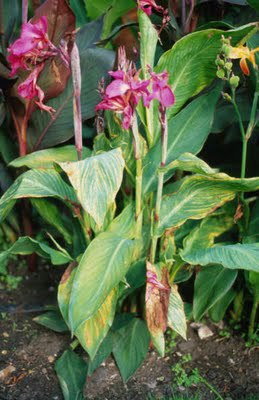 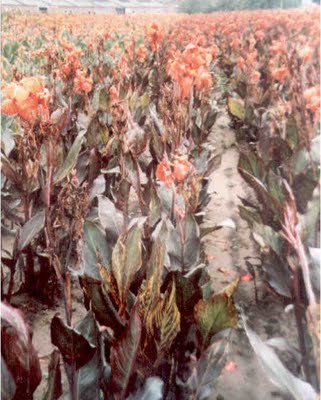 Diseased 'Wyoming' canna
Canna growers are still reeling from the impact of the viruses. The Canna Yellow Mottled Virus is the worst and most obvious with the leaves yellowing and then the whole plant dies. The others cause less havoc, but the plant does not thrive as it should and often has twisted, deformed leaves with streaks and spots, and the flowers may be steaked when they shouldn't be, which makes the plants not saleable. Plants may also be stunted and flower prematurely. Aphids, spider mites, and perhaps other insects can spread Canna Yellow Streak Virus, Bean Yellow Mosaic Virus, and Cucumber Mosaic Virus. There are host plants that carry these virus besides canna which include gladiolus, flowering tobacco (Nicotiana), petunias, freesia and legumes like beans. These viruses can be spread by the insects crossing from the host plants to cannas. The Canna Yellow Mottled Virus (CaYMV) that has caused so much destruction, is only found in cannas and is spread only by propagation of a diseased canna plant. Once a plant has a virus, its seeds will carry the virus, too. Sometimes when cannas carrying a virus are grown in optimum conditions the virus may not be noticeable and the plant will have healthy looking leaves, only to break out when the plants are stressed. The only way to be sure is to send tissue off to be examined in a lab. Therefore, you will probably not know if the canna plants you buy in a local nursery have a virus or not. It has been found that nearly all growers worldwide have infected plants! It is almost certain that plants you buy locally from large chains are infected. Now the best hybridzers and canna growers are propagating their cannas in petri dishes by cell culture from plants examined microscopically for viruses. It is the only way they can sell certified virus free plants.

If you would like some canna lilies but are worried about getting some with a virus, my suggestion is to share with neighbors who have old canna collections seeds and rhizomes that have not been in contact with any varieties sold since 2000. At least this way you can avoid plants that will not live long due to the Canna Yellow Mottled Virus. This should not be too difficult. There are lots of gardens in Texas like this with older canna varieties. Wait to buy the newer varieties from growers with certified virus free plants. It might be that we will just have to learn to live with the kind of viruses spread by insects and if they look too ratty, then just destroy them and start over. The nice thing is that none of the canna viruses have been discovered to reside in the soil and spread to the plants. It might be a bother to have to replace an existing bed of cannas, but at least cannas grow so fast in Texas you will quickly have the opportunity to choose newer varieties that will soon be spilling over in your garden.