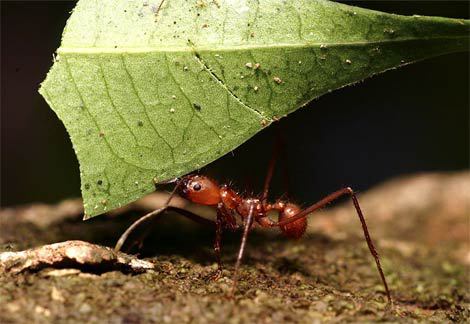 Texas Leaf Cutting Ants (atta texana) are a serious agricultural pest in south-central and eastern Texas, as well as in northwestern Louisiana. Other common names for this ant are: town ants, cut ants, parasol ants, fungus ants or night ants. No matter what you call them, the prognosis is the same - if this ant is in your garden then you have a serious pest inhabiting your soil, and they will decimate your plants. On a more positive note, the cutter ant composts a huge amount of vegetation into the soil, which is a good thing as long as the choice material is not your garden or orchard. The problem is that cutter ants like the leaves on your juicy garden plants better than anything else. 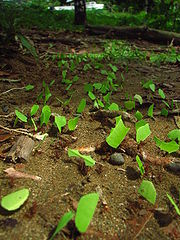 Photo courtesy of Wikipedia.org
Cutting ants are called fungus ants because they inoculate a fungus onto the vegetable matter that they harvest, cultivate the fungus underground, and this is their only food. Cutter ants have many casts of sterile female workers, and each cast has specific tasks in the leaf cutting and fungus growing process, with each cast being successively smaller ants. The largest ant is the queen. At 3/4 of an inch long, she is one of the largest ants in the US. The next largest in size are the soldier ants that guard the entrance to the nest and the foraging trail. The smallest workers are 1/16 of an inch long. Deep in the nest pockets underground, these tiny ants cultivate the fungus upon the leaves that other workers have chewed into a pulpy mass. 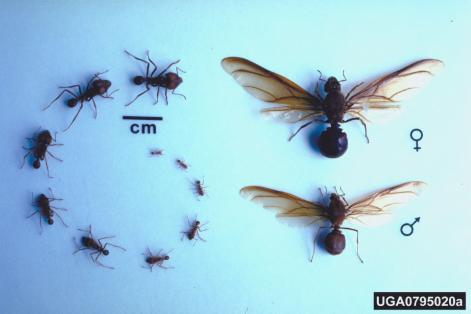 Cutter ants choose a preferred plant to work on that may be as far as 600 from the nest, cut up the leaves and carry the pieces down to their trail where they drop them. Other workers carry these pieces of leaves over their over-sized heads, thus the name parasol ants, down their trail to the nest entrance where they drop them. Smaller workers cut up these scraps of vegetation into bits and take them into the nest where it is deposited into cavities as deep as 15 - 20 feet underground upon which they grow their fungus food. 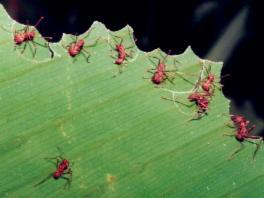 The cutter ants will work on one specific plant for several nights until it is completely stripped of all leaves before they go to the next plant. If the nest contains enough ants, cutter ants can completely strip a small tree of all its leaves in one night. Once their presence is made known by the stripped tree or shrub, gardeners can find the nest by watching for them when they are at work, and following the ants to the entrance hole of their nest. If the ants are working at night, you can follow the trail of dropped leaf pieces to the entrance hole that is usually 1inch in diameter. The opening will eventually become a mound of sandy soil shaped like a crater with the hole down in the center.

The colony begins with a fertilized queen who digs a shallow hole and lays her eggs. She will eat her own eggs at first, inoculating her feces with some of the fungus which she has carried in a pouch in her mouth. When some of the surviving eggs hatch, she will feed them the fungus. After these larvae ants become sterile workers they will go out and forage, bringing back the vegetable matter into the nest and cultivate the fungus on it. The original workers may be quite small, but later, better fed generations will develop into the many different casts of greatly varying sizes. Fully developed females and males have long black wings, and being so much larger than the sterile workers they are often not recognized as the same species. It is usually on a moonless night in April or May after a rain that these ants will swarm by the thousands and mate. Then the male ants will die and the fertilized queens will fly away to make their own nest, carrying a wad of starter fungus in their mouth.

These ants are active in temperatures between 45-80F, which is why they forage at night during the summer, and during the day in the winter. They can strip foliage from plants over an acre wide. Cutter ants prefer plants with juicy leaves such as plum, peach, or other fruit and nut trees, blackberry, crepe myrtles, roses, and many other ornamentals such as daylilies, causing billions of dollars of loss. They also will decimate young live oak trees, and pine seedlings when forage material is scarce in winter. They prefer deep sandy or loamy soils. As the ants proliferate, the colony can grow to have up to 2 million workers. They are especially difficult to eradicate when larger colonies become 'ant towns' that can spread over an acre of ground with several queens. Their complex nests will have several exits, and entrances, with pockets and tunnels that vent the nest, and drains that funnel excess water into cavities away from where the larvae is grown. If it is hot and dry, nest openings may be plugged, and the ants will retreat into the moister subsoil. 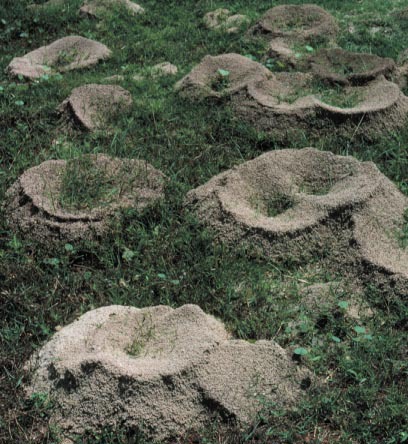 Because they only eat the fungus that they grow, and have such deep nests, ant bait poisons do not eradicate them very well. Acephate dusts and insecticide granules labeled for use on mound ants can be used to control their spread, but if the colony is very large, it will be difficult to achieve complete control of the many deep cavities full of larvae. The best control of cutter ants is to watch out for tale-tale signs of shrubs stripped of their leaves, find the holes, and destroy the nest while it is still small and shallow. You and your neighbors might have to work together to eradicate the ants from your gardens because their foraging trails can extend many feet.