Everybody is fascinated with hummingbirds, including us at Hummingbird Hill, where we have more than 9 feeders going most of the time. They swoop around and dive one another to try to keep a feeder to themselves. You can almost hear the greedy little things saying, "Mine! Mine! All, all, mine!" The problem is that there are so many feeders here, so widely spaced apart; it is difficult for one bird to hog it all. It's rather comical to see them on their sentry perch darting beady glances in all directions for invaders, and then swoop off to check on a distant feeder. As soon as it leaves, a usurper arrives to take a big sip in disdainful pleasure.

There are few other birds that have been as difficult to study. This is because, for one, they are so fast, and two, they are so small, and three they migrate so far, so fast. Now that digital photography has become common, and technology has advanced, much more has been learned. Hummingbirds do not suck nectar through their beaks, but lap it with the tip of their long tongues that have fuzzy ends. Besides the nectar of flowers, they also eat sweet tree sap, and lots of small insects. Here are some more interesting facts. All 339 species of hummingbirds are only found in the Americas. South America has the most species of hummingbirds, and Ecuador has the most of these - 162 species. The US has 16 that summer here, and a few of these overwinter on the coast or along the border of Mexico.

During the summer only two species of hummingbirds nest in the Blackland area of Central Texas, the Black-chinned Hummingbird and the Ruby-throated Hummingbird. But throughout the year, it is possible to see many other species of migrating hummingbirds, so leave your feeders up late, and you might see some of the more rare birds! We are lucky, because most people in the US do not have the chance to see as many hummingbird species as we do, unless you live in Arizona. There are up to 13 species that have been spotted traveling through Austin on their way to somewhere else, even in the winter months. The males come a week or two sooner than the females. They will begin to arrive as early as the 1st of March here in Taylor, and continually straggle in through April and May. Vice versa, they leave from mid-September through mid-November. Hummingbirds will gather in large numbers in the fall where they find adequate food to fatten up for the trip to their winter home, but they leave one by one, not as a flock.

All photos by Cornell Ornithology 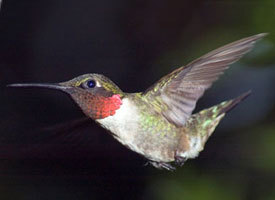 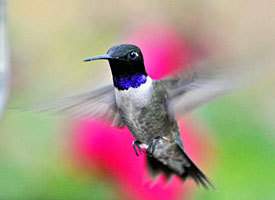 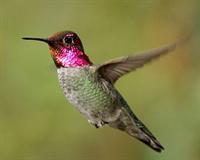 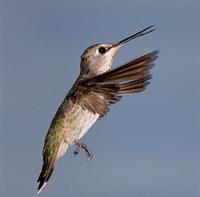 Black-chinned female
Only the female is involved in building the nest and raising the young. The birds are not monogamous, freely mating with any of their own species during the breeding season, and the males do not help with nest building or raising the young. Both of these species have a similar courtship display. To impress the female, the male swoops back and forth in a large U shaped pattern that may go as high as 75 foot over the tree or bush where the female is perched and watching him. He will swoop as close as a few inches from her head. If she likes what she sees, they will quickly mate like most birds, either on the ground, or on the branch of the tree, and then he is off looking for another female, while she gets going with the nest.

If you are lucky you might see a hummingbird nest. It is about the size of half of an English walnut, and cleverly camouflaged to match it's surroundings: for instance, a nest was built on a light fixture on someone's porch and it had paint flakes stuck on it that matched the porch! The nest is glued together with spider's web. The nest might be as low as 5 foot in a shrub for both species, but the Black-chinned Hummingbird rarely nests higher than 15 foot, while the Ruby-throated may nest in the canopy of a tall tree as high as 45 foot! The main criteria is the availability of water, food, and if possible, a place sheltered from the wind.

Copy and paste this web video into your browser. This video is of a female Ruby-throated hummingbird making her nest. She is tamping the hole with her little bottom!

Females often will use the same site year after year. The pea sized eggs are white and there are usually two. The nest is stretchy so the babies can fit while they grow. Only about half of the babies make it, as their predators include squirrels, other birds like the Grackle, Starling, and Blue Jay, and even Praying Mantis have been observed eating baby hummingbirds! Cold, heat, high winds, and heavy rain accounts for the loss of many nestlings. For safety, baby hummingbirds are absolutely silent, and do not cheep. They suddenly begin to squeak after they have flown the nest, but mama is still feeding them. It takes about 40 days from egg to fledgling. Nestlings are fed a regurgitated mixture of partially digested insects and nectar. Fledglings will taste of everything, and they have to learn what to eat and what tastes good, so baby hummingbirds have a very precarious life.

Copy and paste this site in your browser to watch a U-tube video of hummingbird eggs progressing to fledglings leaving the nest.

Yes, hummingbirds eat small bugs, and lots of them, which they catch with their mouths open on the wing, much like nighthawks, (commonly called Bull Bats). They eat half their weight each day, and 8 times their weight in water. They will eat every 15 - 20 minutes. That's a lot of eating! They like water, and will fly and feed in a pouring rain as if it doesn't matter at all. (They spend half of their time in the tropics after all). They will drink and bathe in a birdbath, and enjoy flying through lawn sprinklers.

The migration of hummingbirds is still being studied. The Rufus Hummingbird has the longest migration of them all - from Central Mexico to Alaska! But the Ruby-throated Hummingbird has the most precarious route. They collect together near the coast in Texas before they begin migrating, frantically feeding until they nearly double their weight so they can make the trip without eating. Then they do not leave as a flock. Each hummingbird leaves on it's own timing - across the gulf to South America. Some Ruby-throated Hummingbirds will fly along the coast, some have been seen at rest on boats in the gulf, and some hop across the Bermudas, but most just go straight across the ocean, barely skimming above the waves in 18 - 20 hours of nonstop flying. Many will wait and go with a tail wind to help them, but even a light head wind can cause the mighty mite to perish in the gulf. They sometimes fly with other migrating birds, but it is false that they rest on the flying birds. They make the treacherous journey on their own two little humming wings. Hummingbirds can live up to 7 to 9 years, and it is amazing that the tiny creatures could make this trip that many times!

These are just a few of the fascinating facts about hummingbirds. The way they fly like little helicopters is a science all to itself. You will have fun learning more. Just search online for a wealth of information at your fingertips! Oh, one more thing. A male Ruby-throat weighs about 2 and 1/2 paperclips and can fly 27 miles per hour!