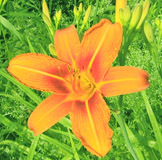 (Scroll to the end for a picture album on daylily types, and pictures of daylily rust.)

Daylilies have become one of America's favorite garden flowers. They come in every color combination imaginable. When I was a child, I only knew it as the orange flower in the picture above that bloomed all summer in the ditches along country roads, hence the common name, Ditch Lily. This is not the Crinum Lily that we know in Texas, which is usually white with pink stripes and wide amaryllis-like leaves. Crinum lilies are not very cold hardy. The common daylily is orange and the leaves are more grass-like. It is extremely hardy and grown even in zone 3 (most northern zone in the US.). It naturalized in the US from early European settlers' gardens, and soon spread wherever the colonists went, as they were not picky about climate, soil type, and were drought hardy. They are called daylily because each flower lasts only for one day. The stalk of flowers is called a scape, and each scape will have several buds on it that open one at a time each day. They were almost completely disease free, and multiplied like rabbits in a clover pasture.

It was in the late 30's that breeders began manipulating the number of chromosomes to double in plants to increase the chances of finding flowers that exhibited more desirable qualities such as hardiness, disease resistance, colors, and better form. This happened in nature sometimes when the plant underwent stress, but breeders found out how to manipulate this with injections of a strong alkaloid obtained from the autumn crocus flower. Daylilies normally are diploid and have 22 chromosomes. Some are triploid and are sterile, with 33 chromosomes, including the orange Ditch Lily above. This means that they reproduce not by making seeds, but vegetatively, with bits of roots. Tetraploid daylilies are fertile and have 44 chromosomes. Diploid daylilies cannot be crossed with tetraploid daylilies. The first tetraploid daylily was artifically created around 1947, but it wasn't until 1978 that a daylily, 'Mary Todd', was given the Stout award, the highest award given by the American Hemerocallis Society. Since then tetraploid daylilies have won numerous Stout Awards, and the daylily became the Cinderella of the garden.

New daylilies were being named and marketed every spring with price tags that were hundreds of dollars for a single fan, and these were eagerly snapped up by nurseries everywhere. Everybody had to have the newest, most unusual daylily. Words like pie-crust edge, spider, stardust, picotee edge, and contrasting eye were codified to describe all the beautiful shapes and forms newly available. The flowers were often fragrant and had thick petals like oriental lilies. Prices quickly dropped as the newest became common, and soon everyone could afford these very beautiful, easy to grow flowers. Some daylilies like the 'Stella De Oro' were shorter, were day-neutral and bloomed continuously all summer, and became the landscape plant of choice around shopping strips and business complexes. Backyard nurseries sprang up overnight because daylilies quickly multiplied into a large clump that had to be divided, and everyone seemed to want some.

Then came along daylily rust, Puccinia hemerocallidis . It was already reported in Asia years ago, but was introduced from Japan on a host plant called patrinia into the US in 2000. This burst the magic daylily bubble, causing panic among daylily growers. Plants exhibiting daylily rust were destroyed, and suspected plants were quarantined. Now, nine years later, daylily rust is better understood, and seems to be here to stay. Just like blackspot on roses, daylilies are being bred for resistance to the disease. Nursery growers now must constantly spray multiple fungicides to stay relatively rust free, and offer no guarantees to sell rust-free plants. Daylilies in more northern climates are easier to keep rust free because they all go dormant in the winter, lose their leaves, and regrow them each summer. Here in the south, some varieties of daylilies never go dormant, and although they don't bloom in the winter, the leaves stay green, hence keeping the rust active year around.

If you are concerned about getting daylily rust on your daylilies, and trust me, you eventually will, here is what the hemerocallis society recommends for you to do. When you buy a new daylily inspect the fans of leaves for rust. If you see some, throw it away, and re-order. Take all new potted plants and quarantine them for 6 months. That is - don't put them anywhere near your established beds, but somewhere else - (Where, I don't know - inside the house? Someone else's yard without daylilies?) When you buy bare root plants, strip off all the fans of leaves down to the crown and discard them in the garbage bin. Drench the stripped crown in a solution with a fungicide in it before you plant them. It will take longer for the daylilies to grow, but they will. Spray your beds of daylilies weekly until the leaves are drenched, alternating the fungicide every week so it won't become resistant. There are no natural sprays or treatments for daylily rust to date.

How sad. These plants used to be relatively disease free. Here's what I recommend. Research for the most disease resistant daylilies. Buy those. Practice good garden hygiene - meaning don't use overhead watering, especially late in the evening so as to keep the leaves dry as possible. Watch for rust. If it shows up, cut off all the leaves on all the daylilies in that bed, put them in the trash bin and not the mulch pile. If you want to try to keep these daylilies, and to keep the rust from spreading then spray the foliage as it reemerges alternately with two of these recommended fungicides at the instructed recommended rate and interval - Banner Maxx (propaconizole), Heritage (ozoxystrobin), Contrast (flutolonil), or Systhane (myclobutanil).

I suggest that if you try this with no success and the rust is seems endemic, destroy those daylilies that seem to have little resistance and learn to live with it. Just don't give your plants to anyone else. Most likely, we daylily growers will have to put up with a little rust, for just like blackspot on roses, it won't go away, is air born, and disease resistant plants are being developed even as you read this. Our beautiful daylily Cinderella has acne, but she will grow out of it, because how we love our daylilies, and breeders are very anxious to accommodate us!

Pictures of rust in the album are from the American Hemerocallis Society. There are some diseases that look similar, but are not rust. If you wipe a white tissue down a suspicious leaf, and it leaves behind a yellow powder, then it is daylily rust.

The pictures of daylily types are compliments of the Gilbert H. Wild nursery. A wonderful place to buy daylilies from for a wide selection and great prices.

The pie-crust edge daylily selection is offered by the Affordable Home and Garden Store (online 2009).