Marigolds used for fall color and an organic pesticide:

There are two Tagetes species: Tagetes erecta is the large African marigold, some of which get up to 16" tall with large blooms, and Tagetes patula is the French marigold that can be as small as 8" tall with small blooms. Both have pompom shaped blooms of gold, yellow, red, and rust or blends thereof, but some are also single daisy-like blooms. Now there are some new white ones available that widens the range of uses. Marigolds bloom best in cooler weather, although they will bloom some during the heat of summer where many flowers just quit. They take only take seven to ten days to germinate, and will bloom in twelve to fourteen weeks. If you get them planted now they will be looking great with your pumpkins and fall decorations, and for the South they make a great alternative to chrysanthemums. Park Seed catalog offers one just for this purpose called 'Marigold Mumsy' that has huge flowers in both gold and yellow that are four inches in diameter on bushy stocky plants only 14" tall.

All pictures courtesy of Burpee Seed 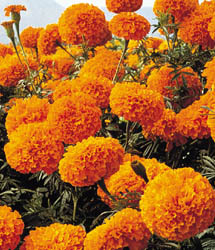 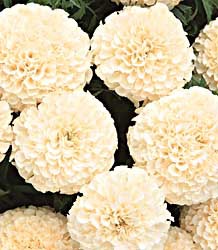 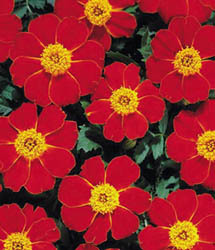 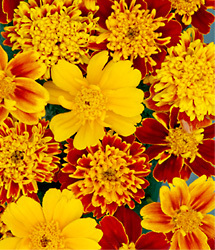 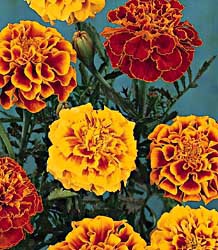 'Happy Days' 10 in
There is a hybrid cross between Tagetes erecta and Tagetes patula called New World Marigolds that are daylength neutral. This means that they set bloom much better in the long daylight of summer, and since they are hybrids they have much more branching than Tagetes erecta, and more flowers, as well as tolerating heat and rain better. The New World Marigolds have both varieties with single flowers types, as well as the full pompom flowered types. 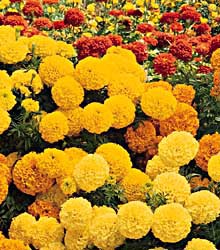 'Lady Hybrid Series' 20 in
I have found Marigolds to be resistant to every type of disease and pests except spider mites. In Texas, the little buggers seem to show up on my marigolds first before they get on anything else. When marigolds sprout in the early spring from leftover fall seed, I have kept them going all summer by hosing off the spider mites regularly, but by then the plants looked pretty ragged. Now, if some volunteers sprout in the spring, I let them grow until summer when the spider mites show up, then I then pull up the old plants, and replant them in late August for fall bloom. It's just not worth all the extra water and diligence to get them all the way through a Central Texas summer, but they are very easy to grow from seed. To start a marigold bed just fork up some good garden soil to loosen it, sow your seeds and water them in. Keep the soil damp by watering the spot once a day until they germinate. If they germinate thickly you will need to thin them so that each plant can spread out at least seven inches wide. They will spread wider than that and the branches will grow together to make a solid bed of flowers. Marigolds have tremendous bloom power.

Here's a tip: I have discovered a wonderful way to keep the dogs from wanting to lay in my wet dirt, especially during the heat of the summer. Poke small branch trimmings 6-12 inches long into the soft dirt all around the bed, and the dogs will leave it alone, for even to walk in it is prickly. I save my branch cuttings just for this purpose it works so well. Flowers will grow up though the branches and completely hide your garden hedgehog sculpture. When it rains, the branches are a support that will keep the flower stalks from getting broken. Marigolds are rather brittle, and the French marigolds are especially bushy where even a strong spray of water easily breaks them, so this method works really well for them.

Another great tip: Keep the dogs happy by making a shady wet spot just for them, or use a mister or keep a baby pool also in the shade. None of these methods are difficult or use much water at all. With these simple efforts you won't have a dog wallowing in your flowers trying to cool off its shaggy body in 102F, and you get to pick where you want them to cool off, not the other way around.

If you have a problem with nematodes, plant marigolds as companion plants. Root-knot nematodes are a serious pest, especially in older established gardens. They are a microscopic plant roundworm that cause knots on the roots of plants, and if there are enough of them the plants won't thrive, and will eventually die as the roots cannot develop normally. Root-knot nematodes are easily spread into your garden from transplants with contaminated soil. Some varieties of marigolds that work better than others to prevent this. It seems that the French marigolds work best. There is even one called Nema-gone offered by the Burpee seed catalog. 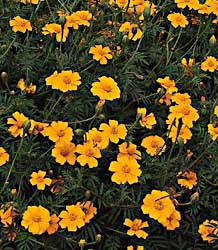 'Nema-gone' 4 ft
Plant French marigolds in the spot where you have had a nematode problem. Sow them thickly, so that there is no more than 7 inches apart. Let them grow at least for two months and then turn them under as a green manure. You must keep the bed free of grass and weeds, because the nematodes will munch on those and keep going in the soil. Marigold roots exudes three types of compounds toxic to nematodes. They also trap the parasites, for when the larvae get in the roots they do not mature to lay eggs. Vegetables that are especially sensitive to nematodes are tomatoes, okra, and all kinds of beans. Try not to plant these vegetables in the same spot every year, but rotate them with other plants and marigolds. Your nematode problem should diminish after a couple of rotations depending upon how clean you keep your garden from weeds, grass, and the severity of the problem.

Marigolds are considered a half-hardy annual, which means that it will take a hard freeze to kill them. They are also drought resistant. This means they will need some water during dry spells. But although they will droop, they won't die if you can't water them every single day. Marigold sap is a skin irritant, so if you transplant them instead of direct sow, use gloves, or if you weed the bed, wear a long sleeve shirt. Many people find the scent of the Marigold blooms strong and unpleasant, so they don't have much use as cut flowers. Other than that, marigolds are a wonderful plant that not only protects your garden from pests, but provides abundant easy bloom to enjoy long into the fall. Once you get a bed started it is easy to save dried seed pods for the next year. Just snap off the pods when they are brown on the stems, and completely dry. Save them in the freezer in baggies to keep them from drying out, and next year you will have enough seeds to plant your whole yard in the bright colors of fall, as well as protect your garden from nematodes. Hooray for marigolds! 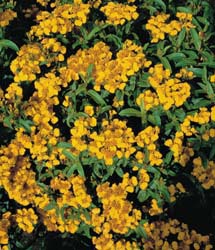 Mexican Mint Marigold 2 ft
Mexican Mint is a heirloom marigold that is anise flavored and used as an herb. It is a marigold that smells good! I love this plant! It is pretty, drought resistant, smells and tastes great, and blooms in the fall.

Links to Marigold culture & use as an organic pesticide:

Root-knot Nematodes in the Vegetable Garden